What Can We Learn From Superdogs?

Upon arrival at the CNE (Canadian National Exhibition) in Toronto today, we didn’t really know what to start with (it really can be overwhelming!), so we spotted that our timing corresponded with the second showing of Superdogs. As we didn’t have much planned, we decided to check it out, and move forward from there.

If you’ve never watched Superdogs (www.superdogs.com), it’s a company whose product is a core group of friendly, loving, extremely well-trained dogs who do a bunch of tricks. But here’s the catch: unlike those stiff, serious competitions where the dogs are judged by measurements and performance and then awarded (or not)  – an environment where what colour ribbon you come home determines the level of the animal’s worth – Superdogs is just about plain, old-fashioned, having fun!! The whole event is MC’d by a guy who makes up his own numbers in the sports that are friendly competitive, and often dogs are trained to purposefully rig the game, or cheat, just to keep the seriousness OUT and playfullness IN. (I’m thinking of the moment when there were a lineup of dogs bounding over bars on a Dog Jump, and the very last one was cantering towards the jump, anticipation in the crowd was high, the trainer made an almost indecipherable move with her arm … and suddenly, instead of jumping over the bar, this pup skidded to a stop, grabbed the bottom bar like a stick, and ran off the stage, chased by a fake-angry trainer! It was HILARIOUS – talk about taking away the serious and putting in the FUN!) 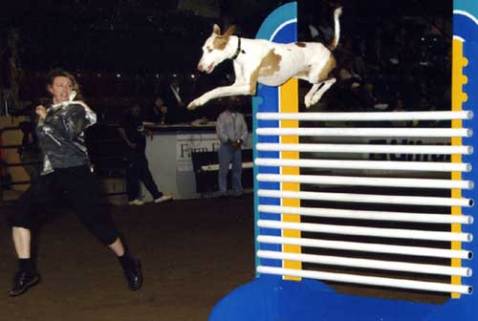 As I was watching this, I realized I was just as pumped up about the pups as the the 6-year-old girl in front of me. And I mean, how could you not, when you are watching a pug fly over jumps, racing a border collie, all for the sheer joy of the game? And I got to thinking, what can we learn from Superdogs?

1) What’s the point if you’re not having fun?
So take the pup, Leap of Faith, in the picture above. He holds the Guiness World Record for highest-jumping dog in the world. But what does that mean for him? What does a World Record mean to a pup who gets such bliss just from jumping just for the sake of jumping?

See, it’s not that these animals HAD to jump over hoops in order to survive. It’s not that they “weren’t feeling like it”, so they lay on the couch and watched TV instead. Nope — these animals were in their bliss just jumping, playing with focus, and hanging out with their trainers. They just loved to use their body, and play with their trainer so much that, no matter what they were “feeling” at the time, they were just stoked to be in the game. Which brings me to my next point….

2) It’s actually really easy to be IN THE ZONE

Hundreds of people going crazy in the stands, maybe thousands of yummy smells reaching up to their nostrils, and each puppy’s eyes were locked on their trainer for the duration of the time on stage. Perhaps they’d lose focus for a moment, but the trainer would snap her fingers, and the pup would be right back there, ready to complete the job.

3) It’s totally OK to fall, just get back in there!

I think one of my favourite parts of watching these dogs do their thing was watching them mess up. There was one routine – led by a father and his 11-year-old son, actually, who did a cute mini-acrobatics routine while throwing big frisbees for their dog, who would jump REALLY high to grab the frisbees. Sometimes he’d miss, but would he dwell on that missed one, think about what he did right and wrong, and feel sad? Heck no! He had his eyes on the next one, and would often jump even higher and catch even better!

I’d say this amazing pup caught about 90% of the frisbees thrown. An impressive number, right? But how often do we either congratulate ourselves on the 90% or berate ourselves for the missed 10%? And then miss the next Frisbee because we’re too busy being in ego?

4) Where you come from doesn’t matter.

Did I mention that over 40% of the puppies from Superdogs are rescue animals from various shelters? And yet every single one was pure joy.

5) At the end of the day, It really isn’t about the final result — but about the bliss in the action.

To be totally honest, the audience couldn’t have cared less about how high Leap of Faith jumped. Though it was nice to know that he’s a world-record-holding dog, I have to say, the true enjoyment came from watching him just LOVE to jump. In fact, the most amusement came from when the puppies were just being in personality, not in how well they fulfilled their job.

I gotta tell ya, these dogs made my DAY. Not only was it great to have some nice life lessons to ponder,  but along with the Blue Bees theme of late of vibe raising… talk about an instant lift!!

So I ask you, today, how can you live your life like a Superdog?